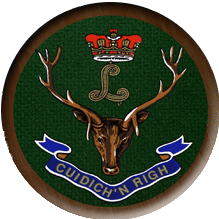 Canada: How it continued

Among the many European immigrants to Canada were lots of Scottish people. The city of Vancouver came up with the idea to create a Highland Regiment in 1909, which officially was formed in 1910. The new regiment became a part of the Canadian Army and was assigned with the only number still available on the Canadian Army List, 72. Coincidentally this was the same number as the 72nd Regiment of Foot, founded in 1777 by Kenneth MacKenzie, Earl of Seaforth, in Scotland. On April 11, 1911 the Canadian Regiment received the official approval of Scotland to use the name Seaforth Highlanders.

In the First World War about 41 officers and 1634 soldiers of the Seaforth Highlanders of Canada Regiment fought with the 16th Overseas Battalion Canadian Expeditionary Force , of which the name was changed to The Canadian Scottish Regiment later on. In Canada the Regiment expanded and went to fight in France as the 72nd Battalion CEF (40 officers and 1055 men). In a short period of time it gained reputation among friend and foe for their courage and in particular their way of patrolling and aggressive trench-battles. The regiment lost great numbers in all those bloody battles. At Vimy Ridge, the 72nd fought at the front of the assault, after which the Canadian troops gained their reputation as best assault troops on the Allied side. However, at the end of the battle only 11 officers and 62 men survived this attack.

The Battle of Passchendaele began at dawn on October 30, 1917. The regiment began the assault on Passchendaele, the men were covered in mud to their waists and fighting through the pouring rain. After bloody battles they reached their goal, Crest Farm. British commanders had calculated that only an entire division of 15000 soldiers could take Passchendaele. In 1919 the Regiment went home to Canada. When the veterans arrived in Vancouver, they received 16 Battle Honours. However this recognition of their courage did not remove the fact that 2515 of the original 3791 soldiers that fought as Seaforth, were wounded or died.

The regiment during World War II

When in 1939 the threat of a new war became stronger every day, and the Germans occupied Poland in September 1939, the Canadian Army was mobilized. On December 20, 1939 the Seaforth Highlanders of Canada, including their band, moved over to Britain as a part of the First Canadian Division, 2nd Infantry Brigade, recognized by the red rectangle (the Red Patch Devils) on the battledress jacket. The first three years of the war were consumed by guarding the coast and training, lots of training. In 1943, the Seaforth Highlanders of Canada were shipped to Italy, where they landed on the beaches of Pachino (Sicily), during operation HUSKY. Before the conquest of Sicily was finished, the Seaforths already received 3 Battle Honours, being Leon Forte, Agira and Adrano. On August 18th, Sicily was finally occupied by the Allied forces. After the conquest of Sicily the Seaforths crossed the Strait of Messina and began their march north into Italyâ€™s mainland.

In December 1943, in the streets of a small town called Ortona, on Italy's eastern coast, the Seaforths gained their most famous victory and basically wrote the book for urban combat for the Canadian army. The merciless street fighting lasted a week . Most allied units in Italy celebrated their Christmas behind a wall or in a battered cowshed. The Seaforth however, did things differently: On Christmas Day 1943, the battalion commander, Ltcol. SW Thomson, ordered the battalions to take turns to eat the relatively luxurious Christmas dinner. A ruined church in southern Ortona , Santa Maria di Constantinapoli , was decorated by Quarter Master Capt. Cameron and his soldiers using tables, chairs and tablecloths. The tables all had their own beer, fruit, chocolate, nuts and candy. He used everything in his power to make a first-class dinner. The menu included; soup, pork, vegetables and Christmas pudding. The dinner had a huge impact on the troops morale. Below is a short piece of the Seaforthâ€™s war diary:

« C Company was the first to have dinner in the church, a dinner no one had felt possible under such conditions, but no one had truly tested the ingenuity and resourcefulness before the QM and staff. From 11.00 to 19.00 hours, when the last man of the Battalion reluctantly left the table to return to the grim realities of the day, there was an atmosphere of cheer and good fellowship in the church, a true Christmas spirit. The impossible had happened. No one had looked for a celebration this day. December 25th was to be another day of war. The expression on the faces of the dirty bearded men as they entered the building was a reward that those responsible are never to forget. When C Company had finished their diner they relieved A Company so that they might come back the 300 or 400 yards for the same. Christmas Day was no less quiet then the preceding ones, but it is one the Regiment will never forget. PM Esson played his pipes several times throughout the meals. During the diner the Signal Officer, Lt W. Gildersleeve, played the church organ and, with the aid of an improvised choir organized by the padre, carols rang throughout the church… »

To celebrate these men's courage, the Regiment holds this dinner every year since. See below for the Regimental Toast brought out during the dinner. 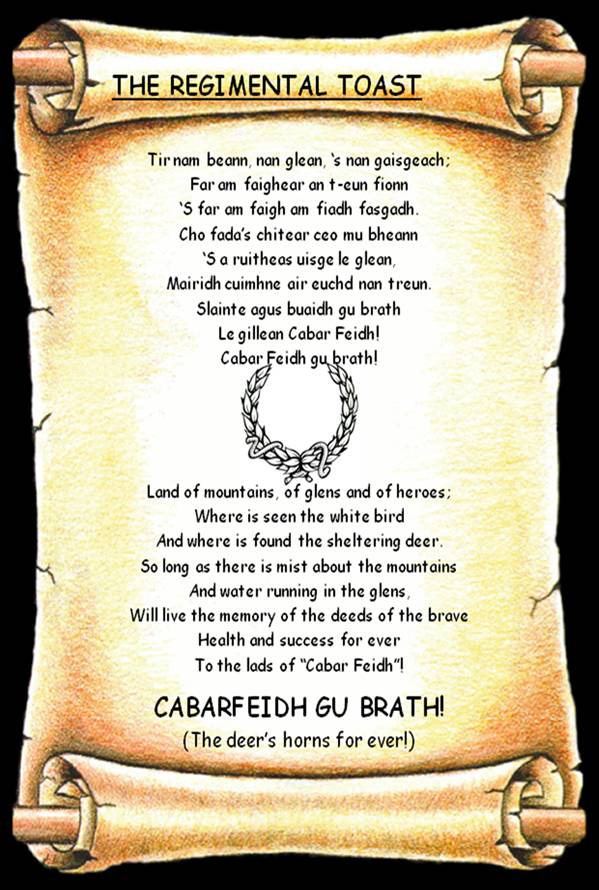 The Seaforths achieved even more success with breaking through the seamingly impenetrable Hitler Line in May 1944, however at a high toll: there wasnâ€™t a single officer in the Regiment not wounded or killed. At the end of World War II, the Regiment had the highest number of fallen officers in all of the Canadian Forces.

In March 1945 the Regiment was transported by boat from Italy to Marseilles and then transported by truck to Belgium. The idea was to take over the Netherlands, of which the south was already liberated, but of which the north and west were still under German occupation after Operation Market Garden in September 1944.

In the spring of 1945 the Allies began their campaign to liberate the Netherlands. The Canadian Army, with also finally 1st Cdn Infantry Division under its command, headed north after the crossing of the Rhine at Rees. While the 2nd and 3rd Cdn Infantry Division along with the 4th Cdn Armoured Division headed for the northern Netherlands, the Polish and British Armed Forces went right off to the heart of Germany. 1st Cdn Infantry Division, led by General Simonds was tasked with operation Cannonshot: the crossing of the river IJssel from the East, and the capture of Apeldoorn and the high ground between that place and Arnhem

Cannon Shot started on April 11 near Gorssel . The 2nd Brigade was to form the front of the attack. The Princess Patricia's Canadian Light Infantry (PPCLI) and The Seaforth Highlanders of Canada would carry out the attack, supported by a massive artillery fire. At 04.30 two battalions began with the crossing of the river IJssel in the 79th Armoured Divisionâ€™s so-called Buffaloes. The Germans were surprised and the action went speedily and according to plan. On the left flank the Seaforths reported no opposition and after 65 minutes all the companies were on the western shore and had taken their intended targets. However, the Patricia's encountered fierce resistance, but after a German tank was disabled they too were able to capture their goals. At 06.00 the first phase of Cannonshot was successful and five engineering corpses could start the capturing of the Ijssel bridges. The Seaforths moved westward through the villages Stroe, Garderen, Voorthuizen, Achterveld Barneveld to enter the Gelderland Valley. In De Glind (near Achterveld) the Seaforths â€˜â€™performed the leapâ€™â€™ to Amsterdam; the capital was freed on May 8th 1945.

Liberation of Amsterdam, May 8th 1945

Amsterdam encountered three major disasters between 1940 and 1945: the German occupation and the following control by terror, the deportation of more than 60,000 Jewish residents and the Hongerwinter (hunger winter) of 1944-1945. This winter killed more than 2,000 people by the lack of food, fuel and medicine. After May 5th, 1945 people were killed by German soldiers when the capital was supposedly free. During a liberation festival on Monday May 7th, soldiers of the Kriegsmarine began shooting into the partying crowd (result: 22 killed, more than a hundred wounded). On May 8th the city was finally free of occupational terror by the Nazis.

The crowd on May 7th was en mass anticipating to greet the Canadians. This started the liberation festivals, that would continue throughout the summer. However, not everyone felt pure joy: lots of people were mentally and/or physically damaged by the war. Thousands of Amsterdam residents suffered from malnutrition after the Hongerwinter. Also people slowly came to the realization that deported relatives were not going to return from the camps. During the liberation festivals the Canadian bagpipe bands performed for the Dutch crowds, this was the start of the founding of todayâ€™s Dutch bagpipe bands.

We are in the process of extending this page…